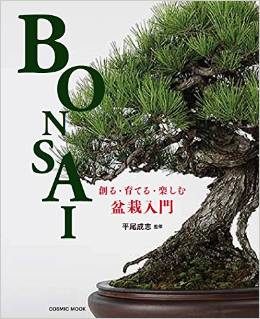 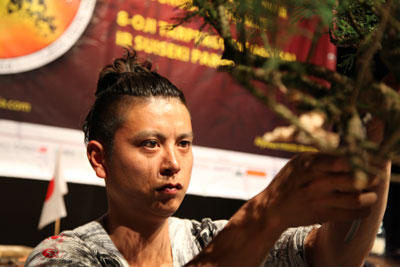 Bonsai master - Masashi Hirao
DOB: February 15th 1981
Having visited Mirei Shigemori’work-Hojo garden at Tofukuji while he was in Kyoto Sangyo University, Masashi was strongly impressed by the beauty of it. Since then he has had his sights on carrying on the Japanese culture and decided to be apprenticed to Kato Manseien in Bonsai cho, Saitama city, Japan. Masashi studied under Saburo Kato and his words to him “Be the one to spread out the great Japanese Bonsai not only in Japan but also overseas” made Masashi expanded the range of his activities.

Masashi performs Bonsai demonstrations, workshops and other performances in various countries and as a result of effort, he was chosen as a Japanese cultural envoy for 2013 and spent 4 months in 11 countries to teach people the beauty and joy of Bonsai. He had a great cultural exchange through Bonsai.

Masashi aims for finding more possibilities of Bonsai to have more gallery exhibitions and performances overseas. In Japan, he would like to have not only presentations of the Bonsai suitable for new life space but also have lectures and educate the young generation about Bonsai.

Having one Bonsai ready to prune(trim branches) and wire(to put wires around branches to make a tree strong) in front of the audience. Masashi’s demonstration is for 2 to 4 hours to show the way of the Japanese Bonsai making and also the development of the further techniques.

Masashi does one Bonsai work at bars, clubs, or even on a street with a band or DJ for the people who are not familiar with Bonsai so they can get to know Bonsai with great enjoyment.

An activity of how to make and manage the Bonsai which Bonsai lovers brought. There are people from the beginners to the advanced so the workshop takes 2 to 3 hours at the shortest and 2 days at the longest. It is a Bonsai class to teach people how to be able to tell great trees from others and extract their potential beauty.